Die Biting The Throat: Review of The Gnoll Credo 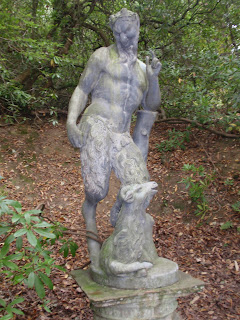 I have read a few works of fanstasy and science fiction in my time, but since my mid twenties, this genre has lost my attention.  There are only so many times you can riff on the theme of Blark the orphaned child teaming up with a wizard/dwarf/elf/orc/thief (one of whom will be a sexy archeress/sorceress), and a half-human, half-giant side-kick called Thraxon, whom together, steel some magical gauntlets of ogre-power from Doomed Mountain and topple the ruthless Lord Shnoopapple.  (The above describes the fantasy genre.  change the names so they contain lots of 'x's and 'z's and you'll cast the sci-fi version.)

So it was with some trepidation I approached 'The Gnoll Credo' (TGC), which I had seen variously described as a work of fantasy and science fiction.  I have long been a fan of J.Stanton's blog Gnolls, featuring as it does, a well reasoned and well written take on the whole approach to ancestral/evolutionary fitness with an unashamedly 'paleo' leaning.

Whereas some paleo enthusiasts are 'health and fitness' bloggers, those that interest me are the ones that see humans as animals (an angle arguably pioneered by Arthur DeVany), and as such, weave so much more in to the science of what it takes to be healthy (and human).  It is a rich seam to explore, a simple concept to understand and powerful in its execution, and is an approach that will see you rolling your eyes when scientists show that sprinting through a wood is WAY more beneficial than spending a similar time and intensity on a treadmill.

The 'human as animal' concept seems to run deeply through the Gnolls blog, and so it does through 'The Gnoll Credo'.  In fact if there was EVER a line to pull me back in to reading a work of science fiction, it is the tenth and final belief of the Gnolls, 'Die Biting the Throat'!

Broadly the book details the relationship between Gryka (an eight foot high female bipedal humanoid hyena), and a human called Aidan O'Rourke.  O'Rourke is an anthropologist who seeks to understand and document gnoll society.

And what of gnolls?  Well they exist in small hunter-gatherer groups.  They are resourceful, intelligent, skillful, social and occasionally savage.  They focus on group survival but can function with independence; maintain firm familial structures and observe sometimes brutal social mores.

O'Rourke's relationship with Gryka begins in their youth and as the cycle of Gryka's life unfolds we reach a bloody climax - the nature of which I will not give away here..

You get a feeling that there may well be some political under current to the book, pitched somewhere between an anarcho-survivalist manifesto and Orwell's 'Animal Farm'.  Perhaps even with a whiff of 'V for Vendetta' spliced with Avatar.

A gnoll wouldn't vote for a politician, nor enter anything as self-domesticating as a system of Western political governance.  That doesn't mean that gnoll society are anarchic and chaotic, just that they have to take responsibility for their own fate and that of those closest to them.  It is this strong bond with each other, and with their environment that makes them somewhat oblivious to their likely fate at the hands of humans led by a bloated and distanced elite whose rapacious desire for territory threatens the gnoll way of life.

The book is quite short and easily finished in an evening or two.  Having read it the once I feel the need to read it again straight away.  The swift one-two of the plot and the pace in general have left me thinking that there is much more in there that I missed the first time.  It is hard to classify and difficult to describe but it is a truly engaging work!

Recommended!
Posted by Asclepius at 21:47

Agreed....it is a good book